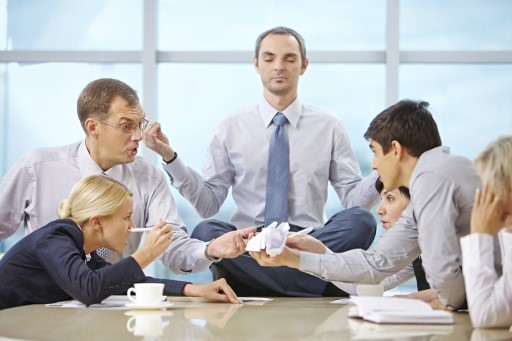 This week’s New York Times article (April 25, Americans are Among the Most Stressed People in the World) shows that global stress levels have reached their highest levels. The new Gallup Study this bellwether article references showed that global stress levels are now higher than they’ve been in a decade, with Americans leading the way as the most stressed-out country in the world. In fact, Americans are so stressed out that In the United States, about 55% of adults said they had experienced stress during “a lot of the day” prior, which compared with just 35% of adults globally. Shocking.

In the immortal words of Apollo 13 astronaut Jack Swigart, “Houston, we have a problem here.”

VUCA (the famous acronym borrowed from military theaters for describing Volatile, Uncertain, Complex, Ambiguous environments) in society itself has undergone a second-order change. Today people at home and at work face a relentless and accelerating torrent of VUCA flooding in from all directions, a cocktail du jour of social, geopolitical, environmental, technological, economic, and environmental chaos. We now inhabit an ostentation of VUCA, an accelerating, shape-shifting kaleidoscope of disruption that is upending everything.

It is our new abnormal. It is the new water we swim in.

This problem is no ordinary problem, it feels freakish because so many of the events that are invading our consciousness are difficult or impossible dilemmas to solve, often at the same time seriously dangerous and unprecedented. Always in these cases caution is called for. Disruption represents opportunity, but it also represents danger.

Super VUCA has been creeping up on us for a while, it is a fabric, and it and it will exact a high price from the platypuses of the Digital-Knowledge Age.  We began quoting IBM’s Global CEO study in 2010, noting the increasing complexity predicted by global CEOs, followed by at least five successive reports over the last eight years from KPMG, Cisco, Chief Executive Magazine, Accenture and others, pointing in the same direction of our own research. In short, global CEOs believe the disruption we are experiencing at the hands of all this growing tsunami in three years will be more disruptive than the last 50! Further, they question their own organizational capacity to deal with all this accelerating complexity, citing the need for the rapid evolution of various new competencies, like agility, creativity, and digital transformation.

Alvin Toffler, the author of Future Shock, described the effect of all this disruption as a sickness that comes from too much change too quickly, a feeling that nothing is permanent anymore. That was half a century ago! According to DOMO’s 2018 report: “Over 2.5 quintillion bytes of data are created every single day, and it’s only going to grow from there. By 2020, DOMO estimated that 1.7MB of data will be created every second for every person on earth. Even further, about 90% of all the data in the world was generated in the last two years! Toffler in his prophetic book offered a definition: “Information overload occurs when the amount of input to a system exceeds its processing capacity. Decision makers have limited cognitive processing capacity. Consequently, when information overload occurs, it is likely that a reduction in decision quality will occur.” Toffler himself wrote these words before the internet, before smartphones,tablets, laptops, or even PCs!

Today in 2019 we see that VUCA is not only alive and well but it has become a steady state, in effect, a new abnormal. Stress related to VUCA has already been well documented in the U.S. Military, especially in the large body of research on returning soldiers affected by PTSD. In the workplace, we are facing our own Super VUCA-induced, PTSD-like epidemic.

Willis Towers Watson recently reported that almost 80% of employers rank stress as their top workplace risk, while both employees and employers rank lack of work-life balance as the number one culprit. Gallup, for almost the last two decades, has reported that the clear majority of both the global workforce and its managers are disengaged. The evidence that stress levels in the U.S. have reached epidemic proportions was documented in a January 2017 American Psychological Association poll which reported a statistically significant increase in stress for the first time since 2007. The World Health Organization estimated workplace stress is costing American businesses up to $300 billion a year. These statistics are serious and continue to rise, to the degree that stress has been called out as the “health epidemic of the 21st century.”

The Super VUCA- related stress epidemic will be one of the most significant societal challenges over the next decade, driving all manner of physical and mental health issues, posing a direct threat to performance capacity, engagement, productivity, and inflating health care costs. Web MD reports that 75 to 90% of all doctor’s office visits are for stress-related ailments and complaints. Stress can play a part in health and wellness problems such as headaches, high blood pressure, heart disease, diabetes, skin conditions, asthma, arthritis, depression, anxiety, and other related issues.

Sadly, it is not only our adult workers who are affected by stress-related illnesses. Super VUCA is taking an alarming toll on our youth. In 2018,Blue Cross Blue Shield released a study, “Major Depression: The Impact on Overall Health” which from 2013 to 2016 found a shocking 47% increase in such diagnoses in millennials (ages 18 to 34) and a 63% increase in adolescents (ages 12 to 17). The hard reality is that today’s Super VUCA will only accelerate.

We can reasonably predict even more disruption ahead. And more disruption guarantees new challenges that will no doubt lead to continued workplace and societal stress – and related illness. To combat the stress epidemic, employers and employees alike will have to find new answers, and soon. They will need to find the paradoxical calm in the eye of the hurricane. They will need to become something new.

Reflexicution is a way to transcend Super VUCA by escaping to a new level of equanimity, peace, and performance. It has an inside and an outside. It has a back and forth, a swinging door, oscillation between two sides, like a pendulum. It also has a beautiful symmetry at different scales of its fractal signature.

“A fractal is a recurring pattern that is self-similar across scales. Fractals are created by repeating a simple process over and over again in an ongoing feedback loop. Driven by recursion, fractals are images of dynamic systems – in effect, pictures of self-reference. The recursive nature of some patterns is obvious in certain examples—a branch from a tree or a frond from a fern, a floret from a broccoli stalk, a miniature replica of the whole: not identical, but similar in nature.

Reflexicution is a fractal practice of sorts, a way to take Super in hand, to move to a new steady state. It is a way to reconcile/distinguish the two sides of polar-complementarity.

Reflexicution (in any context and at every scale) has three parts, (1) Reflection, (2) Execution, and (3) the Swinging Back and Forth Between Them.

Reflecting is a pulling back, a pulling in, a not-doing, Instead, reflection is a space for opening the mind, consciousness, and awareness in order to make better decisions. Reflecting helps us to learn. Reflection is a partner to execution. Without reflection, execution teaches nothing. We reflect on our experiences, actions, feelings, and responses, and then interpreting or analyzing them in order to learn from them to make better decisions, based on this learning.

At any scale, for any project or undertaking, we can do this by asking ourselves questions about what we did, how we did it, and what we learned from doing it. These are called retrospectives in the Agile project world and are a core deliverable of every sprint cycle. In a Super VUCA environment, “reflecting” is not only required it is a permanent requirement in the nonstop “sense and response” of the 21st Century. in the Super VUCA era, is a critical requirement for not only executives, but for every person experiencing stress from Super VUCA. Everyone can benefit from stepping back, pausing, listening, and reflecting.

Execution is not reflecting. Execution is carrying out, getting it done. Execution is putting the plan into place, implementing the chosen course of action. Execution has become a survival skill in the Digital-Knowledge Age. To execute successfully in the Digital-Knowledge Age is achieve, carry, off, complete, realize, fulfill in a way that leverages Digital and Knowledge both. In organizations, execution is about operationalizing a company’s strategy through people, to achieve its strategic goals. At the personal level, execution is about operationalizing and achieving your own personal strategic goals.

Swinging Back and Forth Between Them

Probably the most personal and intimate way to bring Refexicution to life is in your own breathing, one of its simplest fractal signatures. We breathe in and we breathe out in an equilibrium, in a natural cadence, in a tacking between the two poles. Relexicutive breathing is focusing on the two sides of your breathing for their symmetry, opposite direction, rhythm, and relaxation reflex it creates.