In 1937 scientists discovered the phenomena of Superfluidity.  Superfluidity is the property wherein a undergoes a state change such that the substance flows indefinitely without friction or resistance.  The lack of friction allows the perpetual motion of the superfluid.

In 1990 Psychologist Mihaly Csikszentmihalyi’s published his book Flow: The Psychology of Optimal Experience. His investigations of “optimal experience” revealed that what makes an experience genuinely satisfying is a state of consciousness called Flow. He also observed, “enjoyment appears at the boundary between boredom and anxiety.”

In 2005, our own Dave Guerra, originator and leading exponent on the theory and practice of Superperformance, launched his first groundbreaking book Superperformance, New Profound Knowledge for Corporate Leaders.  In his book Guerra leverages the best parts of improvement and complexity science to help amplify organizational Superperformance.

So what does the physics of Superfluidity have to do with the human psychology of flow and the principles of organizational Superperformance?  In concept, quite a lot.

Csikszentmihalyi’s book on Flow talks about the state of “flow” as an optimal experience – a feeling state that results from an intellectually or physically satisfying task. During flow, people typically experience deep enjoyment, creativity, and a total involvement It’s like the feeling I’ve had when road cycling a long distance or when deeply engrossed in a business transformation project.  The key is that you must find yourself totally absorbed in it.  It is not so much the action as the feeling of being completely engrossed in whatever you are doing.  It’s a sense of being so in the moment that you don’t realize that you’re being in the moment.  Time itself seems to be nonexistent.

“We have called this state the flow experience, because this is the term many of the people we interviewed had used in their descriptions of how it felt to be in top form: `It was like floating,’ `I was carried on by the flow.’ It is the opposite of psychic entropy… and those who attain it develop a stronger, more confident self, because more of their psychic energy has been invested successfully in goals they themselves had chosen to pursue.”
– Mihaly Csikszentmihalyi

In Bergland’s pursuit to become a world-class

athlete he realized that there are two very distinctive phases of the flow experience that none of his coaches or mentors ever differentiated. His findings showed that the flow experience was being jumbled up under one umbrella that included an elevated tier that crossed into a much more episodic state of ‘ecstasy’ and ‘peak experiences’ that he had studied in school .

Guerra, in his Superperformance book, proposes a stunningly simple way through today’s complex world of work.  Superperformance is the product of process and culture. In this easy to understand and apply formula “process” is defined  as the work and “culture” is defined as the spirit of an organization.  In an organization’s pursuit to become a world-class, both sides of the equation must reach elevated tiers of flow.

In addressing the process side of the equation, Guerra states: “Transforming flow is Job 1 on the process side of Superperformance.  Flow is the internal process stream in an organization, a requisite property of all living systems. Organizations are the same as any other organism when it comes to this property. The better the flow, the healthier the organism.”Put simply as one of his 8 rules on Superperformance:  “Superperformance is transformed flow”.  So how does an organization transform flow?   According to Guerra it is in large part accomplished by amplifying five key process habits (1) focus, (2) continual improvement, (3) simplicity, (4) project management, and (5) systems and statistical thinking.

But this alone does not make an organization a Superperforming one.  Guerra and the Superperforming Enterprises team maintain that most organizations still cling to the outdated notion that organizations operate as machines, not organisms. Guerra argues that many of today’s workers, leaders and managers are still prisoners of a paradigm that dates back to the Industrial Revolution.  This means that the people in the organization become in effect cogs in the machinery of the organization’s process, rather than people creating an organization that has a a culture that has history and aspirations. Therefore, while transforming process flow helps get an organization to the first tier of flow – one which will maintain the (albeit heightened) current state – it is still not enough.

“The Superperformance spark is struck between an organization’s work and its passion.”
– Dave Guerra

In Csikszentmihalyi speak this might be rephrased as “the flow experience is unleashed psychic energy”.  Guerra starts the section of his book on Superperformance as unleashed passion “Organizations are in highest integrity (from the Latin integer for “wholeness”) when they are inspired with the fire of a felt cause.” He goes on to explain “This level of energy can only be sustained with the highest sense of purpose. … This kind of commitment comes from doing it for love.”

Bergland, in his blog post, states that creating flow regularly is the key to mastery and that the trick to staying in the “Flow Channel” is to continually increase the challenge as your skills improve.  Guerra likewise points to continuous improvement and increased challenges as a means to reaching the second-tier.  “Second-order change (the kind of improvement that occurs by fundamentally changing the system) is mostly an achieved state, arising from successive learning cycles of process improvement created over time”.  Guerra continues “This kind of resolve doesn’t wither with challenge but only grows stronger, more resolute, more certain.”

“Organizations are in highest [wholeness] when they are inspired with the fire of a felt cause. … This level of energy can only be sustained with the highest sense of purpose. … This kind of resolve doesn’t wither with challenge but only grows stronger, more resolute, more certain. This kind of commitment comes from doing it for love.”
– Dave Guerra

In his Flow book, Csikszentmihalyi writes “Enjoyment appears at the boundary between boredom and anxiety”.  For instance, a piece of music that is too simple based on one’s skills will be boring, while music that is too complex will be frustrating.  Guerra in his book calls these polar-. They oppose each other but also need other for completion. In the language of Superperformance, process and culture are polar-complements.  These dimensions work in organizations the same way our own left and right brains work—having different but cooperating functions.  But Guerra doesn’t stop there.  He educates us on the principle called the “Edge of Chaos,” a term coined by computer scientist Chris Langton of the Santa Fe Institute.

The Edge of Chaos describes the crest of “optimum fitness,” a point balanced precariously at the border between the polar-complements of just enough chaos and just enough order.  This continuously shifting border of the edge of chaos is an inexorable point of attraction for optimum fitness.  By oscillating between sides of the border, Superperformers are able to maintain optimum fitness indefinitely. Guerra prescribes that in Superperforming organizations, the edge of chaos maximizes the interaction of process and culture.  In fact, the Superperformance formula works because process and culture are polar-complements, opposing but also in need of each other for completion.

“The edge of chaos is a permeable, center region through which order and disorder flow… it is here that living systems are their most robust, containing the greatest potential for adaptability and learning”
– David Guerra

For more information on Flow, Superfluidity and Superfication® feel free to email me at darryljosefchuk@corpusoptima.com. The first 25 emails to me with 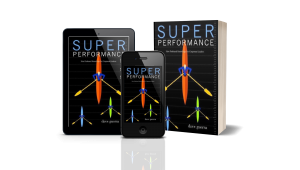 the subject “SPE Flow, Superfluidity and Superfication® Blog Post” will, for a limited time only, receive a free copy of Dave Guerra’s book Superperformance, New Profound Knowledge for Corporate Leaders.